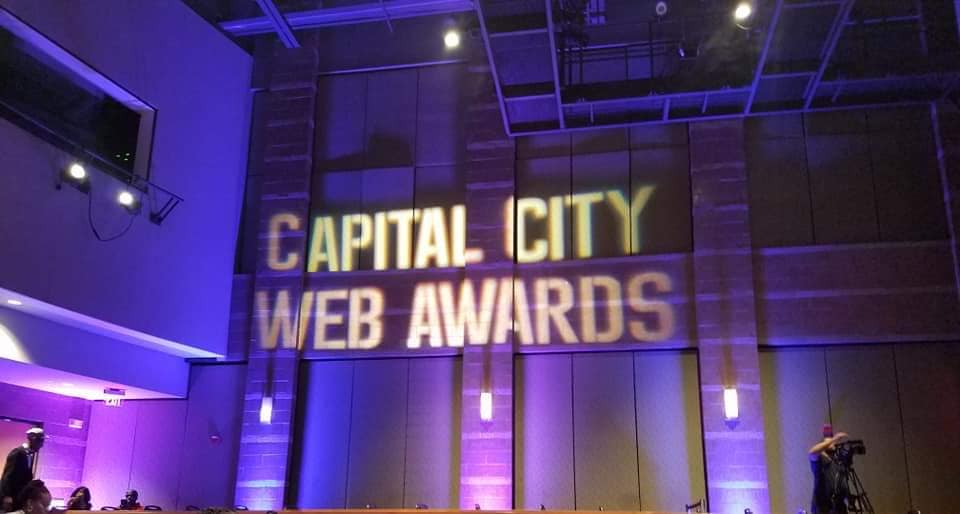 If those passing by THEARC in southeast Washington DC last night thought they’d suddenly been transported to Hollywood, you could hardly blame them. For a night, the District’s vibrant multi-disciplinary community venue, supporting arts, education and other key community initiatives, was transformed as actors and creators walked the red carpet, posed for clusters of photographers, and stopped to answer questions from the media. For all in attendance, it was clear the first annual Capital City Web Awards had arrived.

The Capital City Web Awards, or CCWAs, were the brainchild of D.C. native Anthony Anderson, the two-time Daytime Emmy nominated creator, writer, director, and star of the six-time Emmy nominated digital series “Anacostia,” itself set and shot in and around the storied southeast Washington neighborhood that gives it its name. The program recognizes “outstanding online series created by and/or featuring people of color in 14 categories including directing, acting, hosting and writing.”

Inspired by existing awards shows like the NAACP Image Awards, ALMA Awards, BET Awards, Latin Grammy, and British MOBO (Music of Black Origin) program, Anderson got to thinking.  He was appreciative of the recognition he and his show had received from mainstream programs like the Daytime Emmys and Indie Series Awards through the years, but also acutely aware that that recognitions did not reveal even the tip of the iceberg when it came to quality content created by (and telling the stories of) people of color, particularly that created outside of the traditional and best known channels.

Anderson’s vision was a program that wouldn’t replace, but instead augment the traditional slate entertainment awards programs, providing new and additional opportunities for recognition and celebration within an increasingly diverse industry.  He wanted the program to be peer-recognition based, helping to elevate content traditionally underrepresented on the existing awards schedule, describing the program in an early announcement as “a space for networking, sharing, and peer-recognition to support and encourage the wider and more frequent telling of stories that represent the fullest experience of Americans and people everywhere.”

Those in attendance seemed to agree, both on the need for the program and the success of the initial outing as a vehicle to fill in the gaps in spotlighting and drawing attention to current ethnic- and culture-specific awards programming, particularly in new media storytelling—both fictional/narrative and non-fiction/informative programming.

Talk show host and multi-hyphenate James Lott, Jr. one of the program’s inaugural winners for his non-scripted “Breaking Into…” interview program, summed up the night with a nod to creator Anderson and the successful elevation of diversity in the digital space. “Anthony [accomplished] what he set out to do. There was representation, love and talent in that theater! I’m so honored to have been a part of it.”

In a Facebook post celebrating her show’s three wins, Llandra V. Phillips, creator and star of the sudsy digital series “Asunder,” declared “Thank you to Capital City Web Awards Creator [Anthony Anderson] for giving Content Creators of Color a platform to shine. You have changed the game, sir, and for that I salute you!”

And Dorell Anthony, actor and creator of the digital series “Pride: The Series,” which won the CCWA for “Best Ensemble,” noted the historic nature of being a winner during the program’s debut year while expressing admiration for his ensemble cast’s achievement. “To win as an ensemble with my cast means the world. To be the first ensemble winners at the CCWAs will cement our place in history, which is an incredible honor, if you think about it.”

History and the importance of making a way was on the mind of many, including Derek Lewis Gray, writer-director of the Baltimore-based digital series “Toll Booth,” winner of multiple CCWAs including Outstanding Writing and Best Ensemble (in a tie with “Pride: The Digital Series”), who noted the “great honor” it was “to make history as first recipient of Best Web series at the Capital City Web Awards.

“The night was a celebration to everyone who produces Independent Web series and a call that it is a medium that deserves attention and support.”

Candice Mack, co-creator and co-host of the nominated SoapParty411 podcast, agreed with the sentiment, and mused on why the awards program was so necessary, “[The CCWAs] were needed, as so many of us in the world of web content work so hard to bring our ideas to life in a suitable showcase, and it matters if people are watching, listening, “seeing,” us and that work.  Anthony knows exactly what it’s like to work hard and he understands what we are thinking and where we are coming from, so for him–a man who has created what he has created and been recognized in the ways he’s been recognized—to now turn his attention to creating an award that helps lift the rest of us up in that way, it tells us people are paying attention and that the hard work is being recognized.”

In his initial announcement of the program, Anderson spoke to the driving force behind his creation of the awards, noting the “commonality of experience among creators of color and those who seek to tell the untold stories of and about communities of color,” explaining “with a few exceptions, these projects can be hard to fund, are seen as risky or limited by those who control traditional production and funding, [making] opportunities few and far between, [and only] for the best networked, the breakout stars, or the already established.

“Many of these stories are told without the funding, support, or production infrastructure [seen elsewhere] and it…affects how they are perceived and embraced by the industry, including awards programs. These shows don’t get the attention or coverage they deserve, or need, to be able to advance to the next levels of the industry…. this program is for them.”

Joseph Goncalves of the digital series “Unconditional Love” summed up the evening by expressing gratitude, noting “I am grateful for Anthony Anderson and his vision! To be celebrated amongst such talented and beautiful people is a feeling I will never forget. I am very honored.”

More looks, happenings, and reactions from the Capital City Web Awards below: